ZOFO and the Grant Park Orchestra, lead by Maestro Carlos Kalmar, will perform the world premiere of Carl Vine's concerto for piano four hands and orchestra, Zofomorphosis, commissioned by ZOFO with generous funding and support from the Van Dyke Family Foundation. This program also features Tchaikovsky's suite from The Sleeping Beauty and Josef Suk's Fairy Tale.

Since joining forces as a professional duo in 2009, internationally acclaimed solo pianists EVA-MARIA ZIMMERMANN and KEISUKE NAKAGOSHI - ZOFO - have electrified audiences from Carnegie Hall to Tokyo Japan with their dazzling artistry and outside-the-box thematic programming for piano-four-hands. This GRAMMY-nominated, prize-winning Steinway Artist Ensemble - one of only a handful of duos worldwide devoted exclusively to piano duets - is blazing a bold new path for four-hands groups by focusing on 20th and 21st century repertoire and by commissioning new works from noted composers each year. 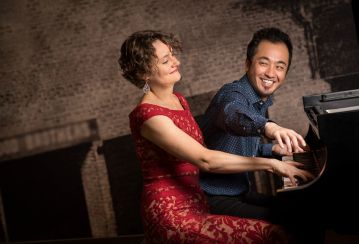 ZOFO, which is shorthand for 20-finger orchestra (ZO=20 and FO=finger orchestra), also performs heart-pumping duet arrangements of famous orchestral pieces such as Stravinsky's "Rite of Spring," exploring the realms in which many composers first experienced their symphonic visions.  They believe that the piano duet is the most intimate form of chamber music, with two musicians playing individual parts on one instrument in a complex, often beautiful choreography of four hands.

Since its inception in 2009, ZOFO has made some remarkable achievements:

FINALISTS: 2011 Osaka International Chamber Music Competition - only piano duo to be elevated to the final round

NATIONAL AND INTERNATIONAL PERFORMANCES at prestigious venues across the United States and in Europe and Japan. They have been featured on American Public Media's Performance Today and in a live in-studio performance on WFMT Chicago's Impromptu.

"ZOFO's feisty performances surge with athletic precision, always mindful of how much joy there is in the music." - WASHINGTON POST 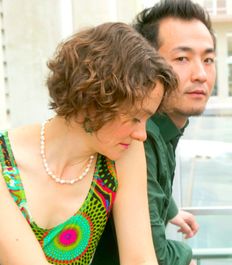 Eva and Keisuke are sincerely grateful to the amazing fans, family, and arts granting organizations who have made it possible for them to commission and perform new duet works each year, including their first major commissions from composers Gabriela Lena Frank, Allen Shawn, William Bolcom and Terry Riley.  Based in San Francisco, California, ZOFO is a fiscally sponsored Affiliate of The San Francisco Friends of Chamber Music.

If you would like to make a tax deductible donation to help fund ZOFO's commissioning projects, please CLICK